I just planned out the itinerary for our 9 days trip in South New Zealand. We roughly have only a few days in Queenstown and three to four days in Tekapo. I love planning itinerary, because I can choose to go all the places according to my preferences. Haha. My fiance never complaint about it, as the the thing that matters him most is FOOD. He has to eat right on time, never put him too hungry, and he likes vegetarian food. If I could satisfy those 3, I can go whenever I want to. 😀

Here is my rough planning of the trip. 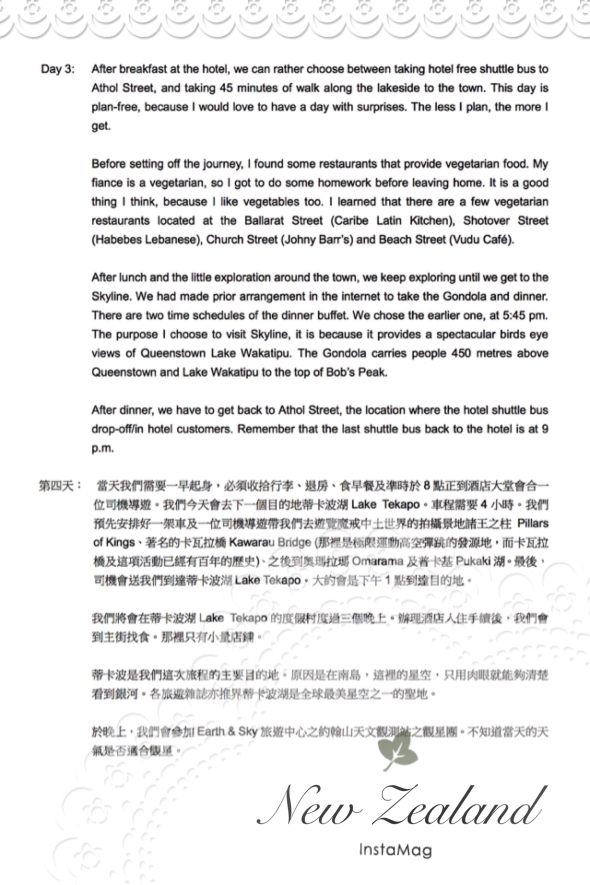 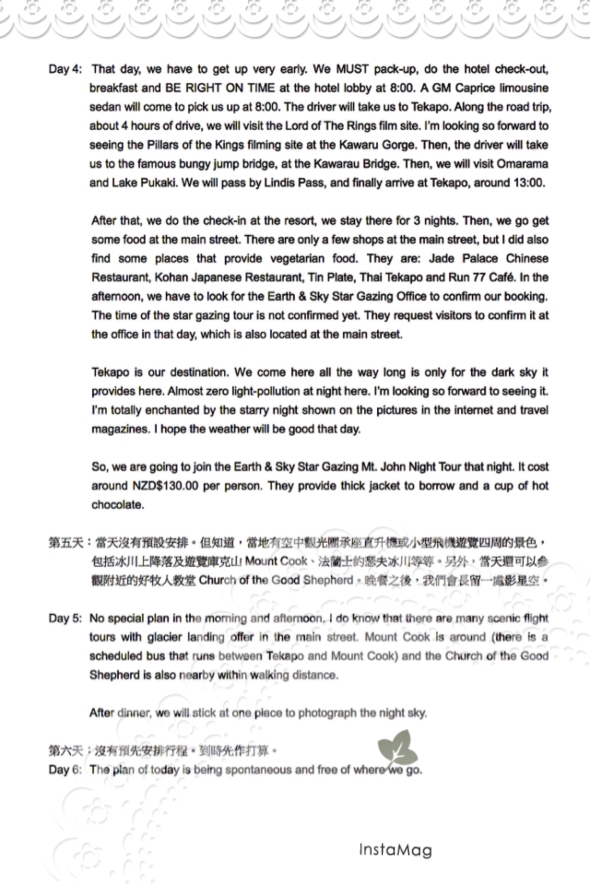 Wayne Dyer said, “A mind at peace, a mind centered and not focused on harming others, is stronger than any physical force in the universe.”

This is a CD that I bought from a trip to Ngong Ping Village, Hong Kong, at Christmas 2014. The female voice and the song captured my attention when I was walking in the village. I followed the sound and came into a souvenir store that sells everything about Buddha. I found the CD, then realized that the song is about the Goddess of Mercy. So beautiful. 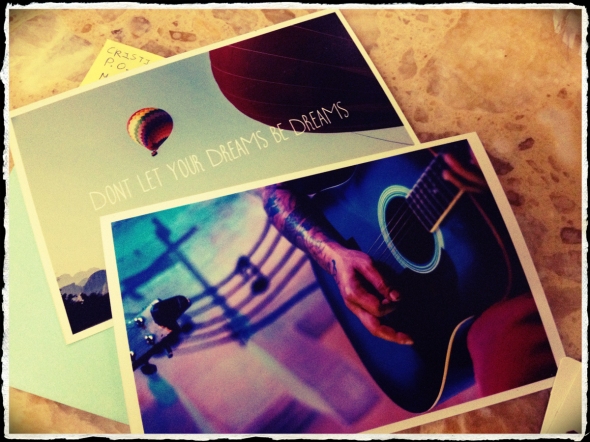 I bought these two postcards from a Russian traveler that I saw on the street who was selling his own photographed postcards to collect funds to travel around the world. Amazing idea! 😀

In my previous blog posts, I talked about what I witnessed in my past life regression, in which I saw myself as a little girl who dressed like a maid with a white apron. I followed the pathway to the entrance gate of the house I was in, and then I saw a black classic car passing by.

A Newspaper Delivery Boy (Paperboy)
At the fountain, I meet a boy (same age as me, 7 or 8). He is wearing a brown colored blouse and a waistcoat (also brown color) over the blouse. In his head, he is wearing a brown colored checkered pattern tweed flat cap. He looks very pretty and friendly. He has freckles on his cheeks and his skin color is white. He is standing in front of me. After a while, he is playing with me at the fountain. I don’t know who he is. I look at his foot then I see a pair of black leather shoes he is wearing is worn out. He has got many newspapers in his arm. He is a newspaper delivery boy…

He has to leave. He turns around and is walking in the direction to the city. Behind him, there is a short hair black and white dog of medium size following him on the road. The dog stares at me with a pair of red eyes, which makes me very scary. I decide to follow the boy to see where he is going. The boy doesn’t know that he is being followed but the dog knows that I’m following them. I come to a grey flat paved road or a bridge (for both pedestrian and automobile). When I look down to the right side, I see that underneath the paved road (or the bridge) it is a one-way traffic lane (5 to 8 lane traffic) with many cars traveling from one destination to another. As I continue to walk, I see a woman in a long black dress walking in my opposite direction. She is holding a white (ivory) colored parasol with lace and a long handle. I don’t know who she is. She passes me by… 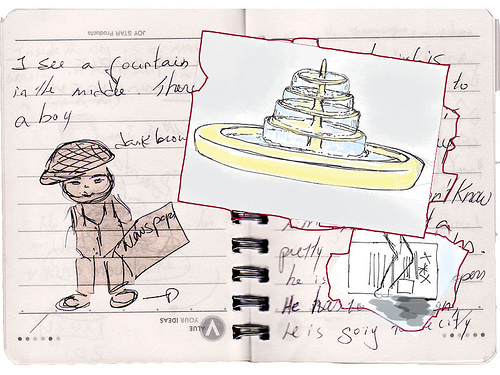 In my previous blog post, I talked about what I witnessed in my past life regression, in which I saw myself as a little girl with a white apron.

A BLACK CLASSIC CAR
I walk to the entrance gate. It is a pair of black wrought iron gates, round at the top border. The gates open when I walk through them. Now, I’m standing outside the gates and in a glimpse, I see a black classic car passing by. It is a fully-closed body car with windows, four wheels, round and short at the rear. There is a man aged around 40 or 50 who is driving the car. Through the car window I can see that the steering wheel of the car is on the right, and the man has moustache, which is narrow and it is in the area between the nose and the upper lip. Moreover, he is wearing a black suit and a black hat. I don’t know who he is. I guess he is just someone who passes by. Before the car is driven away from me, I see numbers at the rear of the car, which are 1, 5, 0 and others two numbers I can’t see. After that, I walk closer to the fountain which is located at the one o’clock position of the iron gates. 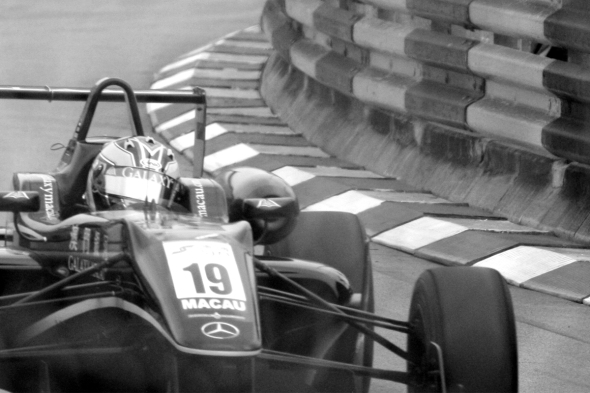 THE HISTORY OF MACAU GRAND PRIX

The Macau Grand Prix was originally conceived in 1954 as a treasure hunt around the streets of the city,[2] but shortly after it was suggested that the hunt’s track could host a professional racing event for local motor enthusiasts. The race continued as an amateur race until 1966, when Belgian driver Mauro Bianchi entered the race in an Alpine A220 (chassis #1722).[3] Alpine Renault had also sent engineer, Jean-Paul Castilleux, to assist Bianchi with technical aspect of the car.[4] Bianchi’s victory and exposure led to more professional racing teams entering the Grand Prix in the following years.

The motorcycle race was introduced in 1967, and in that year the first fatal tragedy struck the race: double champion Dodjie Laurel was killed when he lost control of his car and crashed. This raised the alarm for more safety improvements for the race.

The first Guia race for touring cars was held in 1972. Macau’s Guia Race for touring cars is a particular race for this category, as very few races with these cars are held on street circuits. Since 2005 the race has officially become the final two rounds of FIA World Touring Car Championship.

In 1983, it was decided by the organisers that since Formula Pacific was becoming obsolete, the race would be held as a Formula Three event. Initially, they wanted to run a F2 race, but as they were unwilling to make any large circuit modifications, which included cutting down trees, the organisers settled for F3. This turned out to be a right decision, given the fact that since then it has raised the reputation of the event in the motorsport world by attracting the best young drivers from Europe and Japan to compete in the event. The first F3 race was won by a young Ayrton Senna. The race in 1990 was a memorable one, as Michael Schumacher and Mika Häkkinen were involved in an incident when they were in positions 1 and 2 going into the final lap. At the main straight just after the Mandarin Oriental Bend, Häkkinen hit the back of Schumacher’s car and crashed out when he attempted to overtake him. Schumacher’s car was able to continue with its rear wing damaged and eventually won the race with the best aggregate time. Other notable winners include Formula One drivers David Coulthard, Ralf Schumacher and Takuma Sato. Since the introduction of F3 races, the Macau GP has gradually become a stepping stone for many F3 drivers to higher class motor-racing competitions such as the GP2 series and Formula One.

Macau is a special event for motorcycle riders too. The Motorcycle Grand Prix has featured many famous riders such as Kevin Schwantz, Carl Fogarty, Ron Haslam and Michael Rutter.

Birthdate of the BlogDecember 31st, 2011
Four Year Old
EACH AND EVERY SATURDAY
Blog at WordPress.com.