The Amitofo Care Centre (ACC) – which comprises of an administration centre, children’s dormitories, youth dormitories, preparatory school, kindergarten, library, activity centre, medical centre, vocational training centre, religious centre, CBO etc – is founded and directed by Buddhist clergy from the East with an aspiration and mission to directly rear and care for orphans of Africa within the humanitarian and educational umbrella. The main principles of ACC are based on local African culture, Chinese culture and Buddhist philosophy which are given to the orphans in need. This is considered a unique and remarkable characteristic of ACC although it must be stressed that none of the orphans have taken refuge to Buddhism, as we respect their religious freedom and will allow them to choose their own religions as they enter adulthood.

After an arduous ten years ACC’s caring programme has spread from one location to a number of African countries benefiting thousands of children and adults alike. ACC’s compassionate and philanthropic foot-prints have been left not only in South Africa but also in Swaziland, Burkina Faso, Chad, Gambia, Sao Tome and Principe, Nigeria, Malawi, Zambia, Zimbabwe, Cameroon, etc. as well as Taiwan, Hong Kong, Mainland China, Singapore, Malaysia and several South American countries as St. Vincent and the Grenadines. The total orphans that ACC has adopted to date number around 3000.

The current ACC is in association with three charity institutes namely; the Yuan Tong Culture and Care Association (R.O.C.) , Pu-Hsein Educational Foundation of Taiwan and the Amitofo Charity Association in South Africa that continuously organize and manage ACC operations along with financial support.

Venerable Hui Li, born in Taiwan and tagged as the ‘African monk’, founded ACC specifically for African orphans in the early 90’s and is still the residing chairperson. With his enthusiasm and big heart to bring love and care to the orphans

Ven. Hui Li has been awarded the “Loving of Life” medal by the Chou Ta-Kuan Foundation of Taiwan. He has also been invited by a number of First Ladies of certain African countries. Some of whom refer to him as the Buddhist Albert Sweitzer in praise of his significance and contributions thus far. Nowadays ACC, and Ven. Hui Li, is widely recognized as an international charity and educational institute and sponsored by numerous people in Asia.

The concept of ACC is based on a “Big Family” or “Children’s Village” idea. A group of 16-20 children are put together like a family with one nanny, one ‘mommy’, and one child-care teacher who all live under one roof. These adults are responsible for managing the home and taking care of the children. Twelve families will form a “Village” that provides a domestic atmosphere so that the orphans may experience the warmth of family. Consequently they may experience a social life, interacting with each other as well as learning the responsibility and obligations a resident ought to undertake.

At present the Head Quarters of ACC, the Amitofo Charity Association, is located in South Africa. The ACC in Blantyre, Malawi, is in the process of building a staff dormitory and the Yuan Tong elementary school while in Lilongwe, Malawi, plans are being set up with regards to construction. The ACC in Harare, Zimbabwe, is undergoing phase one of its construction of 30 buildings expected to be completed by the end of the year. In Swaziland and Lesotho construction began in October 2008 with ambitions to start providing shelter for orphans in those regions after one year or so of construction.

Last night, I and my fiance went to a Buddhist Ceremony. We stayed out the crowd and stood on the left side near the stage. I couldn’t believe that the Iphone 5S from my mom could capture the images so clearly from far away. 😀 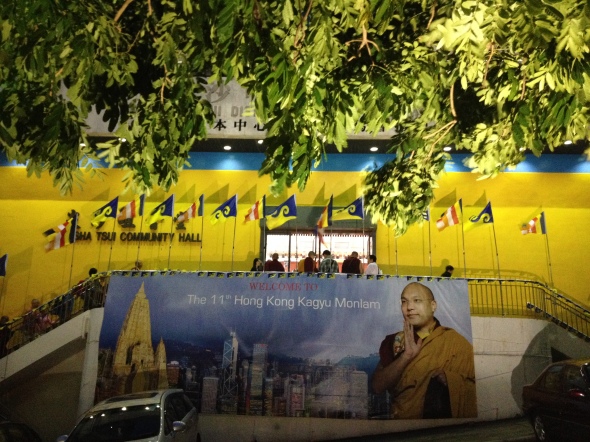 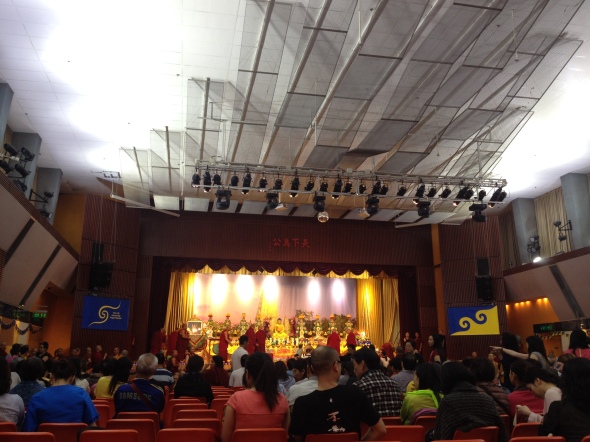 So happy to join the 100 Million Mani Recitation for the first time. The event will be held between September 10 to 13, 2015, at Tsim Sha Tsui District Kaifong Welfare Association. Last year, I attended the closing ceremony musical performance. It was great and very spiritual. This year, I would love to join the “Collecting 100 million OM MANI PADME HUNG” recitation event to dedicate to world peace and bring all religions and ethnic groups into equal and harmony association. I’m looking so forward to attending the event.

Another beautiful song that I would love to share with you here on WordPress. It sings by Imee Ooi in Sanskrit. Here is the lyrics in Sanskrit. It helps to release negative karma, create blessing and abundance for those who hear it.

This is Prajna Paramita Hrdaya Sutram from Imee Ooi. When Avalokiteshvara Bodhisattva was practicing the profound prajna paramita, he illuminated the five skandhas and saw that they are all empty, and he crossed beyond all suffering and difficulty.

I found this free distribution book in Singapore at the Buddha Tooth Relics Temple. The content is so touching and true. Two friends of mine love it so much and shed tears after reading the whole book. That’s why I would love to share it with you here. Hoping it could touch your heart as well.